Everyone has experienced the harm of gossip before. Whether the people talking didn’t mean direct harm, the result of gossip is always broken trust and hurt feelings. Gossip can be defined as information about the behavior or personal life of other people, often without the full truth revealed or known. God’s Word warns us to stay away from people who gossip and to guard our words when we speak about others!

Scripture also uses the word slander which means making a false spoken statement damaging to a person’s reputation. Slander can destroy someone’s marriage, job, wealth, and family. The tongue has power and we must be careful with how we use our words. The Bible tells us what words we should speak, and which we should not.

Gossip is usually the result of people not applying the biblical principles for conflict resolution; and thereby falling into a trap that brings harm to themselves and division to the Body of Messiah – hampering their and our (collective) ability to move forward in the anointing and authority of the Kingdom of God.

15 “If your brother or sister sins, go and point out their fault, just between the two of you. If they listen to you, you have won them over.

16 But if they will not listen, take one or two others along, so that ‘every matter may be established by the testimony of two or three witnesses.’

God uses the differences between us to help us grow.  The choice is ours on how successful our growth is.  We can work through things together and grow in humility, love and unity, or we can choose to avoid conflict resolution and harbor hurts which will divide us and keep us from being all that God intends, individually and collectively.

It takes discipline to make the right choices with regard to conflict resolution.  It’s not easy, but it’s well worth the effort.

“All discipline for the moment seems not to be joyful, but sorrowful; yet to those who have been trained by it, afterwards it yields the peaceful fruit of righteousness.” (Heb. 12:11)

Confrontation is often something we avoid because we don’t want conflict.  But truthfully the conflict will be there whether we confront it or not. And because conflict is something that comes between two people to divide them, it breaks our unity until confronted and resolved.

Conflicts need to be handled in “tool box” discussions where certain rules of communicating (tools) must be adhered to in order for people to be heard, and issues to be dealt with in a godly way. 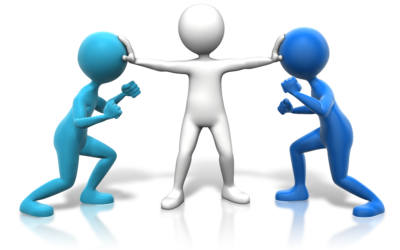